The termination of mining activities to the north of Derby and Nottingham in the British East-Midlands, resulted in a legacy of severely contaminated sites in the 1980s. DEME was awarded a huge remediation contract in a joint venture for one of these sites, the former Avenue Coking Works in Chesterfield. This was dubbed the most polluted site of Europe given the heavy contamination present and the consequential pollution of the adjacent River Rother.

Avenue Coking Works was open from 1956 to 1992 and was a fully integrated plant producing smokeless fuels and processing by-products that were produced through the carbonisation of coal. These by-products comprised sulphuric acid, ammonium sulphate, pure benzene and toluene, xylene, naphthalene and other acids and organic compounds. 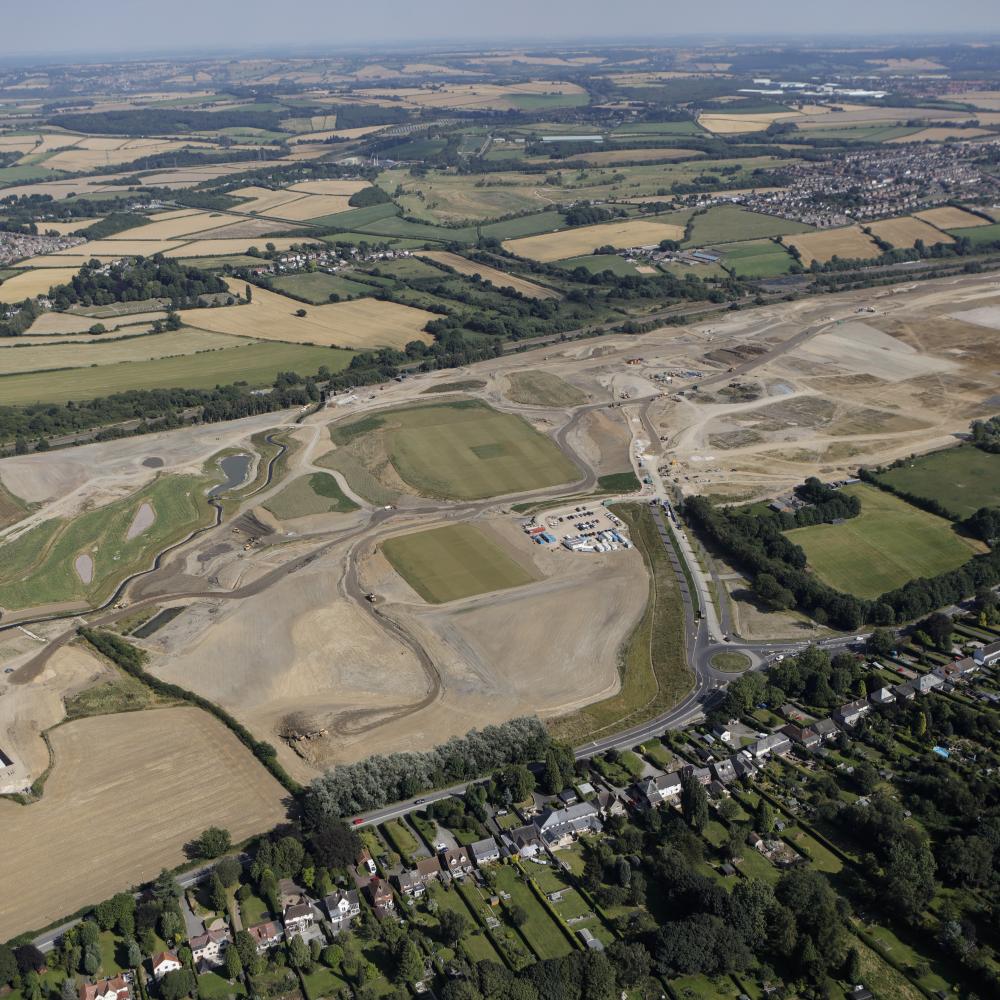 In July 2006, DEME in a joint venture partnership (VSD Avenue) with Sita Remediation (NL) and Volker Stevin (UK) was awarded the contract for this massive clean-up operation. The joint venture partnership was chosen because of our innovative techniques and extensive experience with these types of remediation projects. The contract consisted of the design and construction and it required the excavation and treatment of 2 million m³ of contaminated soil.

On a surface of 98 ha around the former Coking Works, the soil was saturated with hydrocarbons and tar. All of the contaminated soils were treated on site to limit the transport and storage. We used an extensive range of innovative techniques including thermal treatment, physical-chemical soil washing, bioremediation and separating techniques using mobile treatment plants on site.

In 2001 and 2002, we performed trials on bioremediation which indicated that bioremediation was a key process in achieving the earthworks’ balance. Then in 2006, after VSD Avenue became the preferred contractor, additional waste tip separation and water treatment trials where undertaken.

In 2006, VSD Avenue was awarded the design contract for the remediation of the site. The team designed an optimal balance of various treatment techniques for a very wide range of contaminants in various types of soil and sediments.

Within the joint venture DEME was responsible for a broad scope of activities, including:

The Environmental Permit for all of the soil treatment activities

Excavation and selection of material

An extensive Site Investigation found that the tarry, wet and highly calorific sludge from Lagoons 2 and 4 could only be treated by thermal treatment, whereas the drier and granular material from the waste tip was more suitable for bioremediation after first passing through the screening/picking process.

Bioremediation was used to treat material to a standard to enable it to be reused. The screened, dry, waste tip material and plant area hotspots were amenable for treatment and the leachable drivers of benzene, cyanide, phenol and thiocyanate were managed by careful bio-bed management. Our engineers followed the progress of bioremediation by regular chemical sampling determination of carbon dioxide and oxygen levels and the bed temperature.

The trials of 2006 confirmed the design of the operation to deal with those products that could not be incorporated into the final landform. A screen split the waste tip material into three size fractions. The small fraction was relatively free of deleterious material and was, after screening, stockpiled and tested to determine whether it was fit for reuse or requiring treatment. The largest fraction was subject to further sorting, screening and crushing as it contained concrete bricks, belting, rags etc. The mid-size fraction went through a picking station where items including asbestos were manually sorted and removed from the stream. A final screen sorted the output of this stream. Safety was a vital concern. Fresh, carbon-filtered air was fed into the picking station as the environment could be high in VOCs and there is an asbestos fibre risk. The separated waste was collected in skips below the picking station and sent for off-site disposal.

Planning and permitting obligations required the operation of a Water Management Plan (WMP) for the site to ensure that the risks to ground and surface waters were minimised. Key parts of the WMP included dirty water holding ponds collecting run-off from the excavation, processing areas and roads. The system of concrete bunded, haul roads, specifically designed and installed on the site, removed the risk of further contaminating the sub-surface in the event of spillage.

Water from the dirty water holding ponds was pumped to the Water Treatment Plant (WTP) that utilised the concrete structures of the old site’s WTP which had been modified to become an oil/water separator, mixing/pH correction tank and two settlement tanks. Settled water was pumped to the WTP in which the water was dosed with sodium hypochlorite to remove thiocyanates, and subject to sand filtration and carbon filtration ahead of discharge to the sewer. In the summer months biological treatment of the water reduced the reliance on chemical dosing and carbon filtration.

Thermal treatment was required to achieve the earthworks’ balance for the site by taking the most highly contaminated materials and making those the cleanest on site. This clean material was then used close to the river in the northern part of the site. Highly contaminated lagoon sludge was mixed with drier and less calorific material to attain the appropriate calorific value and moisture content.

The blended material then processed through the 25t/hr kiln at temperatures in excess of 500°C to wipe out the organic contamination. The off-gases were subject to cyclonic action to remove large dust particles (fed back through the kiln) and then through the processes of oxidation at 1,000°C, to turn the organic contamination to carbon dioxide and water vapour. Filtration of fine particles via a bag-house; acid gas removal through sodium hydroxide and/or lime milk scrubbers, and mercury vapour removal through carbon filtration were other remediation steps that took place. Air emissions were continuously monitored.

A sheet pile, coffer dam structure was also constructed on the flood plain. This structure protected Lagoon 2 excavations from inundation during extreme flooding events. When these excavations were completed the river was diverted back through where Lagoon 2 now sits. The structure prevents a flood affecting works in the empty old river channel and surrounding areas.

Unfortunately, Chesterfield experienced severe flooding in 2000 and 2007. Therefore, one of the important aspects in delivering the project was the construction of a flood alleviation embankment for the Environment Agency. The embankment contained a culvert and weir, and is managed by the EA to hold back flood waters on the Avenue site to stop the city centre being flooded.

As well as working very closely with our joint venture partners, we worked in close cooperation with the customer Homes and Community Agency (HCA) and the neighbourhood. HCA had set up a website that showed the progress of the works and opened a Visitor’s Centre where school children and local residents could learn about the ongoing remediation. We were also involved in a great number of stakeholder engagement meetings with Parish Councils, local interested parties, County Council Planning Members, local schools and businesses.

Are you interested in becoming our new Project Finance controller?
We are looking for a motivated candidate to strengthen our team. You will be part of the Financial department and you will be involved in the financial aspects of our Environmental projects. You will be responsible for the financial follow-up of our projects.

The environmental group of companies of the DEME group is specialized in remediation of contaminated soil, construction or rehabilitation of landfills for domestic or industrial waste, recycling of sludge and decontamination and lagunation of silt, major clean-up operations of brownfields . Currently we are looking for a site superintendent four our remediation projects in Flanders.