Although the countless lakes and woods in Sweden are its most important environmental asset, the wood and timber industry – and the paper industry in particular – have severely contaminated the lake beds with unmonitored discharges and dumping. Unacceptable levels of mercury were found in two lakes near the city of Hultsfred in Sweden. 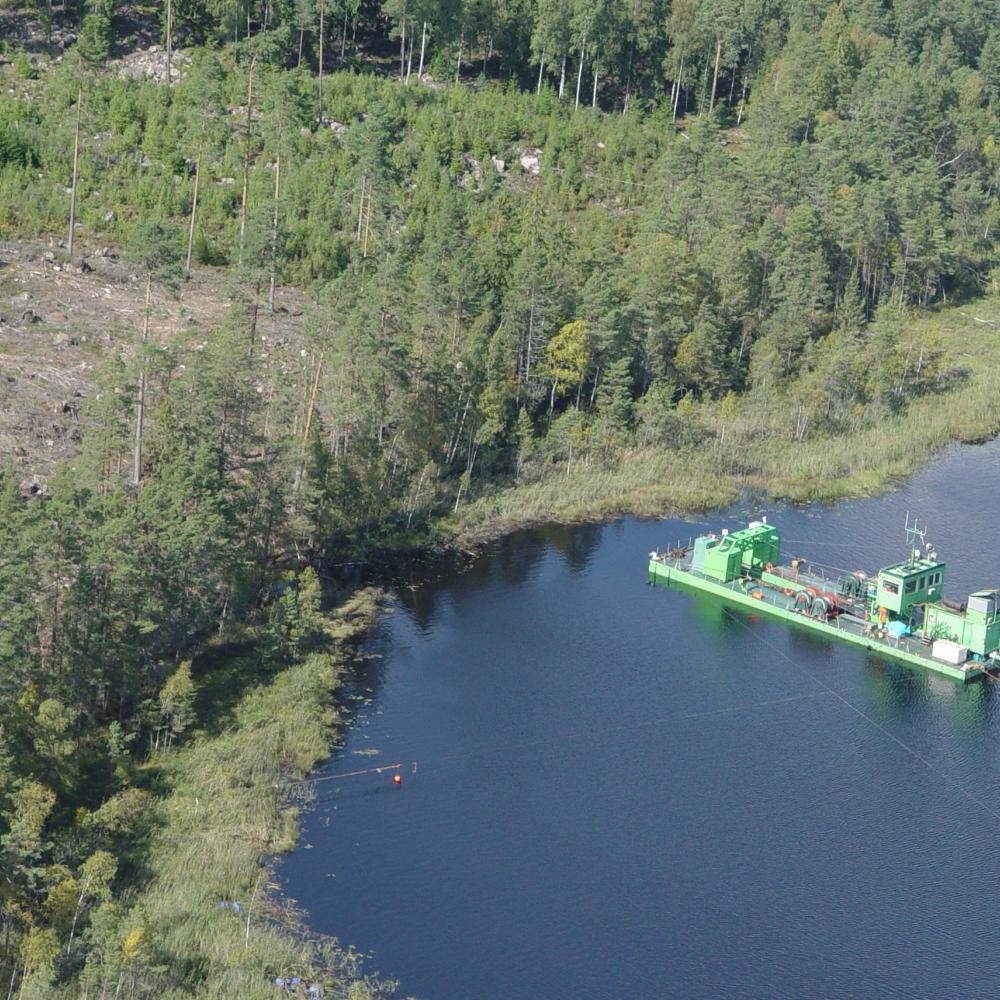 DEME designed and dimensioned an environmental dredging method to clear the mercury sediments and other pollutants from the two lakes, even building a special new vessel called the ‘Pixie’ that is able to dredge mechanically and transport the sediments hydraulically. In the summer of 2006, we eventually dredged 280,000 m³ of contaminated sediment using the new vessel. Then after dredging the sediment was pumped to a disposal site.

This pioneering project also made large-scale use of geotubes for dewatering the sediments. By deploying a system of geotubes, the sludge is encapsulated and protected from the surrounding soil. The geotubes had a diameter of a few metres and were 50 to 100 m long. Water that came from the dewatering process was purified before discharge. A custom-built water treatment plant, with a capacity of 200 m³ per hour, treated the water over a 1.5 year period.

Do you want to work in a vibrant, challenging, interesting and international environment? Do you want to be part of the HR Team responsible for more than 2500 crewmembers of 100+ nationalities? Will you be our next crew planner responsible for the organization and coordination of the personnel on board of one of our vessels?

Are you passionate about sustainability and willing to contribute to the further roll out of our strategy to all business units? Do you enjoy working in the exciting field of data collection, data analysis, monitoring and reporting which is critical to measure the progress of our Sustainability Programmes and action plans?

Within our Sustainability Department, we are looking for an enthusiastic and driven Junior Sustainability Specialist. If you are up for a challenge where you can help DEME being a front runner also when it comes to sustainability, do not hesitate and apply!

Are you looking for an environment that shows passion, drive and innovation?

Then perhaps you are the Fairs and event manager we are currently searching for.
Part of DEME’s Group Communications team, our tomorrow’s Fairs and Event Manager will be accountable for overlooking the seamless organization and timely delivery of all DEME company events, physical, hybrid or online. We are looking for someone with a clear vision and creativity, someone who is able to act as a trusted expert advisor to the team and the business, yet also holds the drive for rolling up the sleeves and get things done.

DEME is a global solutions provider in a challenging and rapidly changing world. Our expertise and vast experience has been deployed over the centuries for dredging, environmental and marine engineering business solutions such as: port construction and improving maritime access worldwide. We have been creating land for 150 years and will continue to do so in the future. Therefore we are looking for motivated candidates to reinforce our team.

DEME's objective is to provide a healthy work environment, to promote sound work practices and a healthy lifestyle for everyone involved in our business. QHSE is therefore one of the supportive departments that is involved in all Quality, Health, Safety and Environmental matters on our projects and in HQ. As a QHSE Engineer you will be involved in marine infrastructure/civil projects (i.e. port & harbor constructions, immersed tunnels, tunneling and foundation works) that complement and reinforce DEME’s activities.
More specifically, you will be part of the on-site team of one of our infra projects in the Netherlands. You will be responsible for the day-to-day coordination and supervision of all QHSE related matters.

Job Description Summary
As Technical Superintendent Offshore, you work as part of one of our vessel teams, where you will be responsible for the coordination of maintenance and repairing activities of vessel(s) assigned and/or its equipment or other assets. Your main base will be at our HQ in Belgium or in our office in Breda, the Netherlands.

Due to our sustained investment effort DEME operates one of the largest and most modern, versatile and purpose-built fleets in the world. As a Technical Superintendent you will work in an environment that strongly encourages innovation and will give you the responsibility to make an operational difference. Due to the challenging environment in which you are dealing with heavy equipment, complex installations and project deadlines, there is a steep learning curve in various technical fields.